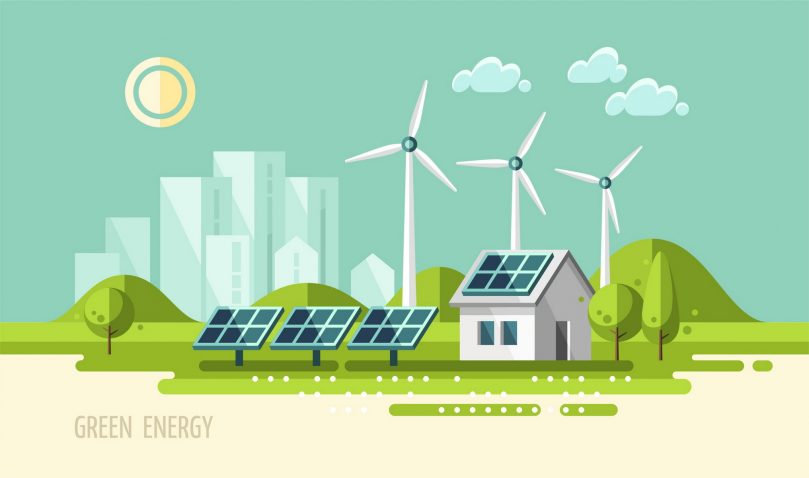 Traditional electricity is produced via the rotation of a generator within a power plant. The generator is built with an electromagnetic (a magnet produced by electricity) shaft that has insulated wires cylindrically coiled around the inside of it. When the electromagnetic shaft rotates, small electric currents are formed in each wire that, in turn, form a large current within the generator.

That all seems pretty harmless and, truth be told, it is. So then why is there a huge push to use cleaner electricity?

In order to get the generator to spin, you have to use a turbine, and in order to power the turbine, you need to create sufficient heat for steam. According to the U.S. Energy Information Administration (EIA), 70% of electricity produced in the US is powered by steam turbines – most of which rely on coal and natural gas. When these fossil fuels are burned, they create the heat necessary for the steam turbines to help generate electricity. However, there is a price to pay that doesn’t show up on people’s bills.

Through the use of these fossil fuels, a variety of emissions occur that have negative health and environmental impacts. These emissions include:

The CO2 produced from electricity accounts for about 40% of the total CO2 emissions in the U.S., which is approximately 1,925 million metric tons of CO2 annually according to the EIA.

Solar electricity is produced when particles of sunlight, called photons, are converted into electrons of direct current (DC) electricity. Solar panels consist of many small, square-shaped panels of semiconductors—normally made from silicon—called solar cells. These solar cells are what take the sunlight and, through a number of chemical reactions, convert it to DC electricity. This current then flows into an inverter, which converts the DC into alternating current (AC) electricity and powers your home. As you can see, solar energy is very straight forward and the entire process can be done from the comfort of your home. Furthermore, unlike the generation of traditional electricity, solar electricity generation produces zero air and water pollution and zero greenhouse gas emissions.

Generating electricity from the sun is clean, safe, sustainable, and a sound solution to our current electricity practices. Interested in going solar? Visit sharoncu.ownmysolar.com for more information.